ADAPT is the official distributor of Triton Dispenser for South Africa and Africa.

Get ice cold beer! Each dispenser includes a freezable gel block. Brand these draught dispensers with YOUR logo. 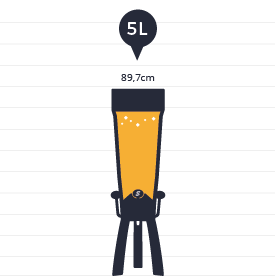 Patented Triton System – Ease of use and guaranteed hygiene.

The “Patented Triton System” combines two patented qualities which make the Triton tabletop beer dispenser the most hygienic on the market, and give it unique benefits compared to other tabletop dispensers:

What is a Triton dispenser used for?
It’s a fun way to serve draught beer at the tables of bars or restaurants. A Triton dispenser is portable and becomes a focal point for a party of customers who can enjoy filling their own glasses. Triton Promo, Triton Classic and Triton Sky dispensers have three taps, allowing simultaneous self-service and a lively drinking experience.

Just for beer?
Our dispensers are optimised to serve beer, but they can be used for many other beverages, cold or hot: Cider, wine, cocktails, juices, etc. Triton dispensers are not appropriate for drinks which contain solids (for example fruit pulp) which can clog-up the valves.

Doesn’t the drink heat up? Doesn’t it lose its fizz?
No. Thanks to the insulating properties of the materials used in the manufacture of our dispensers and the cooling solutions which we offer for all models,Triton dispensers maintain the drink’s temperature and optimum serving quality during the reasonable drinking period.

Are they hygienic?
Yes. We are proud to manufacture the most hygienic tabletop beer dispensers on the market. There is no mouth or hand contact with any of the components designed to come into contact with the drink. Also, our Patented Triton System ensures that all components, both primary and secondary, are accessible and can be taken apart, thus making them easier to clean.

Are they easy to clean?
Yes. All Triton dispensers are designed for easy washing, because all of it’s components are totally accessible and can be dismantled, avoiding any hard-to-reach corners. Our Triton Promo, Triton Classic and Triton Sky dispensers ship with a free Cleaning Brush and a free Professional Cleaning Protocol. For Triton Original we offer optional cleaning accessories.

Are they food-safe?
Yes. We certify that all Triton dispensers comply with the following food-safety legislation for plastics in contact with food:

Can I buy spares?
Yes. In the case of loss or occasional breakage of a component, all parts can be purchased as spares.

What warranty to you offer?
Our dispensers are guaranteed against all defects of manufacture, in materials and workmanship, during a period of one year from date of purchase in any country of the world. Deliveries within the European Union will comply with Directive 1999/44/EC of the European Parliament and of the Council of 25 May 1999.

Alternatively please click ‘Request Quote’ below to choose the products you want a quote on, from our full catalogue.

Minimum quantities apply on all products. However, if an order for the same product is already in our system, which would allow us to "piggy back" a smaller quantity of your choice, we will do so. This cannot be guaranteed, but will be accommodated wherever possible.
Menu
We use cookies on our website to give you the most relevant experience by remembering your preferences and repeat visits. By clicking “Accept All”, you consent to the use of ALL the cookies. However, you may visit "Cookie Settings" to provide a controlled consent.
Cookie SettingsAccept All
Manage consent

This website uses cookies to improve your experience while you navigate through the website. Out of these, the cookies that are categorized as necessary are stored on your browser as they are essential for the working of basic functionalities of the website. We also use third-party cookies that help us analyze and understand how you use this website. These cookies will be stored in your browser only with your consent. You also have the option to opt-out of these cookies. But opting out of some of these cookies may affect your browsing experience.
Necessary Always Enabled
Necessary cookies are absolutely essential for the website to function properly. These cookies ensure basic functionalities and security features of the website, anonymously.
Functional
Functional cookies help to perform certain functionalities like sharing the content of the website on social media platforms, collect feedbacks, and other third-party features.
Performance
Performance cookies are used to understand and analyze the key performance indexes of the website which helps in delivering a better user experience for the visitors.
Analytics
Analytical cookies are used to understand how visitors interact with the website. These cookies help provide information on metrics the number of visitors, bounce rate, traffic source, etc.
Advertisement
Advertisement cookies are used to provide visitors with relevant ads and marketing campaigns. These cookies track visitors across websites and collect information to provide customized ads.
Others
Other uncategorized cookies are those that are being analyzed and have not been classified into a category as yet.
SAVE & ACCEPT

Enter your details and stand a chance to win one of 20 x R2000 gift vouchers for a WILD Cooler!

(Your information will never be shared or sold to a 3rd party.)